Jobs at Sea: Is Maritime Career Still a Good Choice?

Jobs at sea have always been demanding; and the past several months have revealed new challenges. Seafarers found themselves stranded on vessels for months; others, on the contrary, were unable to join due to the global lockdown. Covid-19 cases were spotted on board all over the world; while only 13 countries have supported the IMO’s initiative to acknowledge seafarers as key workers during the pandemic and work out special protocols for them.

Nevertheless, seafarers have stayed on their vessels ensuring the world doesn’t collapse into a humanitarian crisis in addition to the pandemic and recession. Mariners are the true heroes of the moment, but let’s take a closer look at the seafarer’s profession and evaluate its future prospects.

It appears that the ICS (International Chamber of Shipping) statistics we’ve used in our Seafarer’s Salary Research has long become out-dated. Today China has occupied the piedestal of the Top Crew Providing Nations List with 1.58 million of registered seafarers in 2018 (figures by Maritime Affairs Bureau of China).

Incidentally, according to ICS 2015 figures, the total number of seafarers in the world was 1.648 million; so the growth in China was quite dramatic. Another interesting fact about Chinese top position is that 15% (239 000) of captains’ and officers’ licences are held by women making China the unofficial leader of “Empowering women in maritime” movement as well.

So, according to 2018 figures, the up-dated top of crew-providing nations looks as follows:

Therefore, today the total number of seafarers in the world creeps up to 2 500 000 and continues to grow.

Presently, the maritime industry climbs up from a ditch it found itself due to Covid-19 pandemic. Some companies, especially in the oil and gas sector, have filed for bankruptcy (Hornbeck Offshore, Noble Corp., etc.); VLCCs have been used as oil terminas, but the industry recovers as oil prices return to normal gradually.

Dry bulk market has suffered severely as well with so many ports closed and operations suspended at so many lines. Most new-building orders are now either cancelled or postponed at present, but the current operations are restored, so there are plenty of vacancies for seafarers.

Knowing where we are standing at present, let’s consider if our conservative pros and cons still apply.

Good salaries and legal tax avoidance have always been among the strongest incentives to join the maritime industry. Fortunately, the advantage is still here. Almost all maritime countries have developed special tax reliefs for their seafarers:

In addition to income tax benefits, jobs at sea are well paid all over the world. There are some curious tendencies, though:

Another great advantage of a career at sea is an opportunity to recharge properly between voyages. While onshore workers try to cram all work and play into a weekend, seamen have several months to have proper holidays, complete some family affairs if any and enjoy their hobbies.

This advantage has not changed a lot; and although offshore workers tend to have more hectic working schedules (2 weeks on/2 weeks off for instance, they find consolation in short periods at sea and smaller probability to miss some precious moments at home).

Travelling is one more strong lure for a maritime career. Seafarers are paid to travel extensively; it seems they’ve seen the entire world and can provide multicultural counseling. Yet, the advantage is slipping away as many big vessels are loaded/unloaded either at sea or at special terminals facilities far away from cities.

Vessels are designed to allow minimum time at port, so seafarers don’t have much time to explore new destinations, but shore leaves are the moments all seafarers look forward to.

There is a great thing about jobs at sea; maritime professionals have to carry on studying their entire working life. Seafarers have to train in order to acquire promotion, a new certificate or endorsement, to familiarize with some new regulation or improve personal skills. The process might seem never ending and tedious, but it is extremely useful for the professional and personal development.

Maritime professionals are in demand onshore once they’ve seen enough of sea.

The first and obvious drawback of a career at sea is a risk to health and life. Seamen have even been included into ‘Top 3 Most Dangerous Jobs in the U.S.’ in 2019 with a 55.1 fatal injury rate per 100,000 workers. Pirates, unavailability of professional medical help, hazardous working conditions take their toll despite a variety of preventive acts and regulations.

Cardiovascular disease (CVD) is the commonest cause of death at sea among seafarers accordinging to Norwegian Centre for Maritime Medicine and Centre of Maritime Health and Society (Denmark) which have conducted an extensive survey of factors that affect seafarers’ health at sea.

They have divided such factors into 4 categories:

However, there is a definite improvement in this field. Vessels are better equipped, officers take Medical Care are refresher courses while helicopters can pick the seafarer in medical emergencies up  from the vessel.

Insecurity of Jobs at Sea

Many seafarers’ health problems arise from reduced crew on board of modern ships. More duties are performed by each crewmember year by year, so fatigue and stress follow seafarers around the globe. 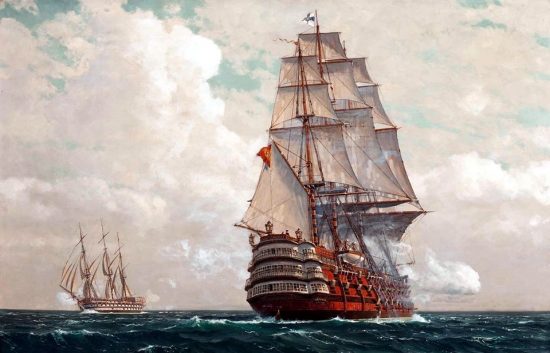 Today, Valemax Bulkers that are among the largest ships in the world 2020  and carry 400 000 tons of iron have a crew of only 29. Robotization is coming to the maritime industry as well; and although construction of unmanned ships such as Kongsberg Yara Binkerland is paused due to Covid-19 pandemic, it seems robotic vessels are an inevitable future of shipping.

Separation from Home and Loved Ones

Jobs at sea require mariners to spend more time at sea than they do at home. Therefore, it is difficult to say after a time where your home is. Furthermore, it is impossible to plan all important events for a vacation time.

Births, parents’ jubilees, friend’s weddings and other important events missed, the sense of isolation starts nagging and affects performance. Bad internet connection and inability to talk to family and friends for weeks doesn’t help either.

Outsiders might imagine that life at sea is full of exciting adventures, but in fact nowadays mariners live in strict accordance to international and company’s policies and procedures. All tasks are described and shifts defined.

Living in a confined space, working and socializing with the same people and eating rather boring food for months is not everyones cup of tea. However, there is a definite improvement in comparison to the past times.

Nowadays vessels present better accommodation, some facilities for entertainment and exercise; not to mention that food diversity is incomparable to the merchant fleet of the past.

Too Much Bureaucracy on Board

The number of checklists and reports seafarers have to complete pricks on the nerves of all mariners. The worst thing is that the situation is not about to get better. New regulations get adopted almost daily; and seafarers have to keep up, acquire more certificates; and then fill out forms or submit reports.

Looking up all pros and cons of a career at sea, we can say that it still is a great choice. It remains rewarding and stimulating despite the drawbacks that should be dealt with if you want to be happy at sea: