Top 10 Biggest Ports in the World

People often wonder which is the biggest port in the world. US Google alone registers above 500 such queries every month, but the result of this search often proves to be rather boring.

Port statistics mostly include the busiest ports in the world. Therefore, all of them are container ports and 9 out of 10 are located in SouthEast Asia. In addition, 6 of the 10 world’s biggest ports are Chinese. This is logical enough as China produced 28.7 percent of all manufactured goods in the world in 2019 (according to the UN Statistics division) exporting USD 2.6 trillion of goods. Naturally, the country needs facilities to transport these volumes.

Meanwhile, such a rating makes a rather monotonous reading, so we have produced a different Top 10 list which includes not only the largest container port in the world, but oil and gas and even biggest cruise ship terminals.

The Largest Sea Port in the World

The Largest Port in Europe

The Largest Oil Port in the World

Number of oil ports in the world by country

The Biggest Cruise Ship Port in the World

The Biggest LNG Port in the World

The Largest Sea Port in the World

Port Of Shanghai in China has been both the largest and the busiest port in the world since 2010 when it overtook Singapore. For instance, Shanghai port handled 43.3 million TEUs (twenty-foot equivalent units) during the year 2019 that stands for above 750 million tonnes of cargo.

Facts and figures about the Port Of Shanghai:

The Port of Shanghai overtook Singapore back in 2010. Today the second busiest port in the world handles about 37 million TEUs per year; and the rest of the record breaking ports can be seen in the diagram below (data credits to VisualCapitalist). 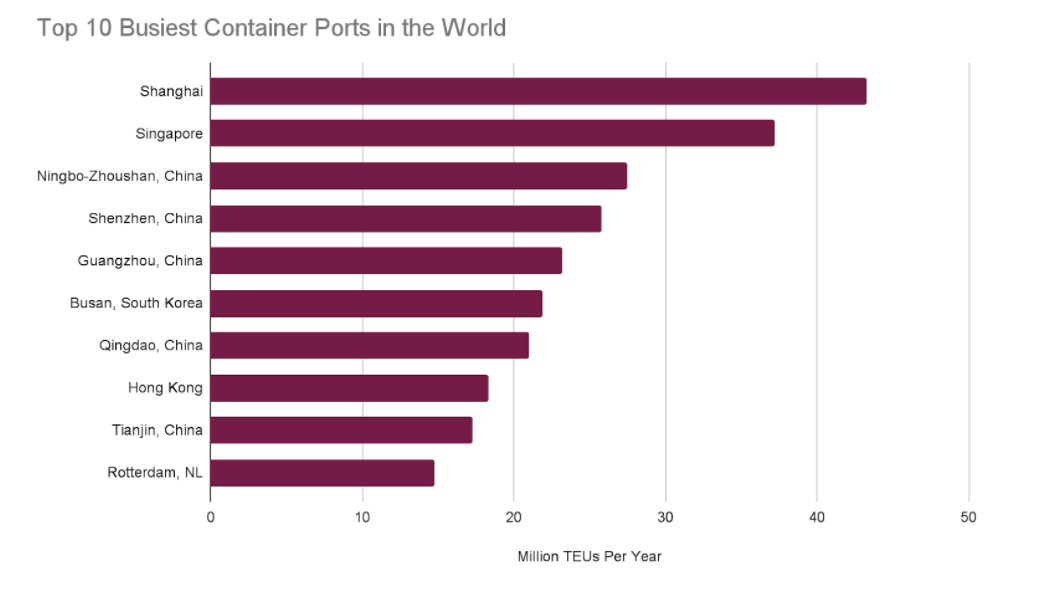 The Largest Port in Europe

Port of Rotterdam is the largest port by size in Europe and the only ‘western’ port in the list. During the period from 1962 to 2004 it used to be the biggest port in the world by cargo volume, but Asian ports have long overtaken European harbours spurred by intensive manufacturing capacity of their countries. Nevertheless, the port of Rotterdam still appears to have some trump cards in its pocket.

Facts and figures about Port of Rotterdam:

The Largest Oil Port in the World

According to the U.S. Energy Administration statistics, more than 61% of the world’s oil transportation is conducted by sea meaning that around 59 million of barrels are carried by crude oil and oil products tankers every day. 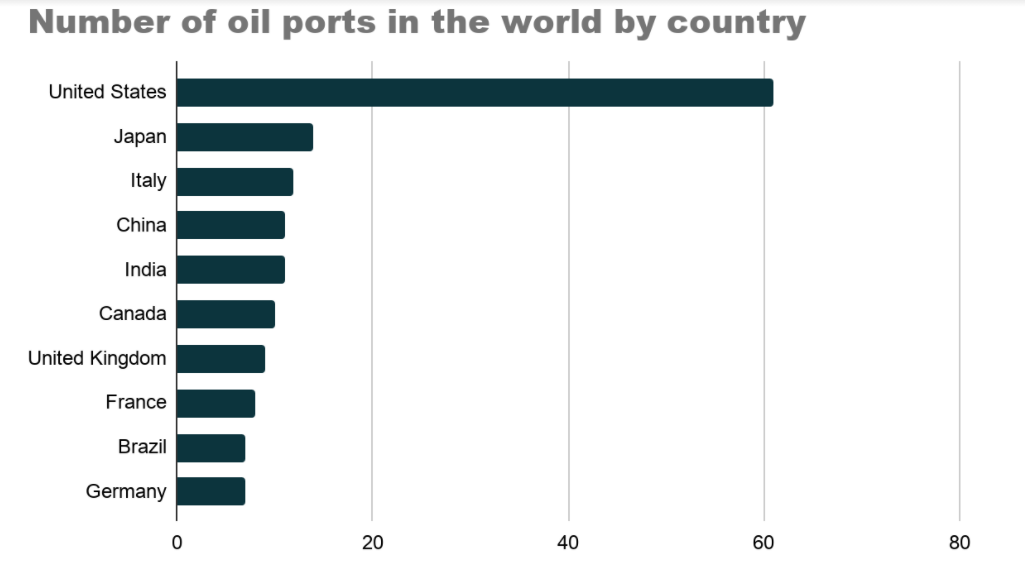 The Loop is the biggest offshore oil port in the world located 29 km (18 nm) off the Louisiana coast. The facility handles about 13% of crude oil imported to the US which is above 1.2 million barrels (190,000 m3) a day. The LOOP is equipped with a pipeline reaching 50% of all the US refineries.

Facts and figures about the Louisiana Offshore Oil Port:

The Biggest Cruise Ship Port in the World

The largest cruise ship port in the world is the Port of Miami. It is conveniently located in Biscayne Bay, so is connected both to Miami Downtown by Port Boulevard and Watson Island through the PortMiami Tunnel.

Facts and figures about MiamiPort:

Despite the current depressing statistics it is interesting to check the normal state of things in the cruise ship industry. In accordance with NAFTA Region Port Cruise Traffic 2014-2016 and other sources the ten world’s busiest cruise ports usually handle around 32.3 million cruise ship passengers every year (2016 – 2017 figures). 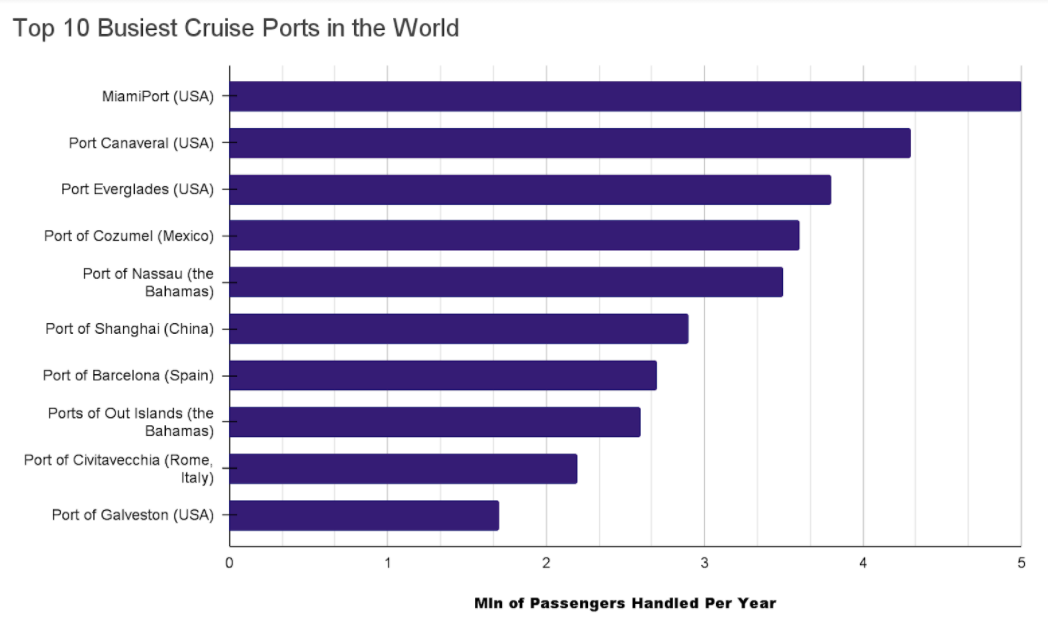 The Biggest LNG Port in the World

The world is changing rapidly and natural gas takes over oil products and coal. As a result, giant gas terminals mushroom all over the world.
The largest sea port in the world for LNG/LPG cargo is the Incheon LNG terminal on the north-west coast of South Korea. Its capacity is 2,660,000 m³, so it is able to accommodate two ultra-large LNG carriers at the same time. 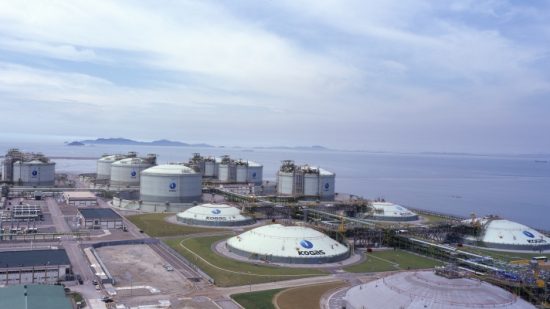 Facts and figures about the Incheon LNG terminal

Incheon is owned and operated by KOGAS (Korea Gas Corporation) which is the world’s largest importer of LNG.
Terminal was built in 1983.
The terminal supplies natural gas to the Incheon and Seoul metropolitan areas, which account for 40% of the country’s natural gas demand.