The global fleet has almost doubled for the past 10 years. Where there were just 17 406 vessels in 2008; there are over 34 000 ships delivered by 2018. The shipbuilding industry has been working at a tremendous speed; and though the past few years haven’t not exactly been the ‘Golden Age’ for the yards; engineers and ship owners still have united forces to deliver masterpieces of marine technology. The most notable newbuilds are collected below. 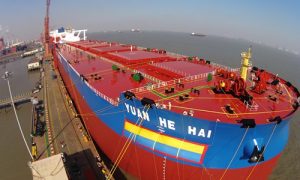 BRS Group Brokers in their ‘Annual Review 2018’ of shipbuilding admitted that they seriously underestimated the ordering potential of dry bulk owners in 2017.Thus, back in 2016 three companies (ICBC Leasing, COSCO and China Merchant Group) placed a colossal order for thirty 400,000 dwt VLOCs at Chinese yards to be later contracted to the Brazilian iron ore miner Vale. Fair enough, it was difficult to foresee that such a deal could be repeated. However, 37 VLOCs more have been ordered at Chinese, Korean and Japanese yards in 2017.

On January the 11, 2018, the first of ten 400,000 dwt Valemaxes was delivered to COSCO SHIPPING BULK    . It was named M.V. Yuan He Hai; and with the length of 362 meters, breadth of 65 meters and depth of 30.4 meters it rightly took its place among the biggest dry bulk vessels ever constructed. She is technologically advanced too, highly automatic and boasts of loading in a single round with the maximum handling speed.

The 2017 record order put the total count of Valemax bulkers both in operation and under construction to 68 ships; and 2018 orderbooks promise to bring new records.

Electric Vehicles Are Taking Over

It seems that days of good old-fashioned internal combustion engine are truly over now. Drivers all over the world still haven’t ceased to lament the end of the era of big roaring cars and their replacement by small silent vehicles of the future. Now electric propulsion is taking over shipping industry. 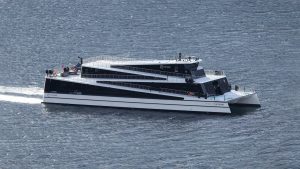 The Norwegian ship operator Fjords AS recently took delivery of the all-electric passenger vessel M/V  The Future of the Fjords which from the start received the prestigious SMM Ship of the Year 2018 Award.  The Future is the upgraded version of The Vision of the Fjords hybrid vessel delivered in 2016. But compared to its sister vessel, this year’s winner is zero emission both to air and water as its body structure allows preventing sewage spillage into the fjords.

However, the truly interesting construction solution is naturally the ship’s batteries. While today is it tiresome enough to recharge electric car’s batteries; it is even more challenging to top up the entire vessel. Especially, when it is harbored in the small picturesque Gudvangen where the local grid can only produce a charging capacity of 1.2MWh and may not endure such power surges. That’s why Brødrene Aa shipyards’ engineers came up with an idea to install 2.4MWh battery bank into the 40m fiber glass body of the vessel so it can recharge during the day.

M/V  The Future of the Fjords sails between Flåm and Gudvangen looking into one of the most beautiful places of Europe, UNESCO listed Nærøyfjord.

While the electrically powered ships still belong to the future of the shipping industry; the LNG-fueled vessels have already become its present. This is a reasonable response to the 2020 Sulphur global cap decision (0.5% sulphur content in HFO) meaning that more and more ship owners choose LNG as a primary fuel for their newbuildings.

Meanwhile, two container market leaders made the orders that put the technology at a completely new level. The French CMA CGM and Swiss MSC together placed a deal for the 20 LNG-Fueled 22 000 TEU Container Ships to be built at Chinese and South Korean yards with delivery starting from January 2020. Apart from being impressive as it is, such big projects usually inspire side activity which is no less notable.

For instance, in order to bunker its’ nine LNG-fueled behemoths CMA CGM ordered and out-standing LNG bunker vessel (LNGBV) back in early 2018. Once delivered she will be three times bigger that any LNGBV now in existence; which is quite logical as it has to service VLCVs with fuel tank capacity of 18,600 m3. Incidentally, the Hudong-Zhonghua yard has to build the new production line in order to construct and install the membrane containment system for the bunker vessel’s cargo tanks and bunker tanks for newbuilding vessels.

Back to LNG VLCVs, here technology is in constant progress too. In early September 2018, Chinese Dalian Shipbuilding Industry Company Ltd (DSIC) signed a joint development project (JDP) agreement with the DNV GL for the new 23,000 TEU LNG-powered Ultra Large Container Vessel (ULCV). The interesting fact is that during press conference the DSIC President especially marked the demand for LNG vessels of such type and successes in the bunkering for LNG –powered ships.

Offshore market news headlines have been riddled with words like ‘losses’ and ‘red ink’ for the past couple of years; but here ship owners persistently conjured up resources for some interesting and even sometimes game-changing projects as well. 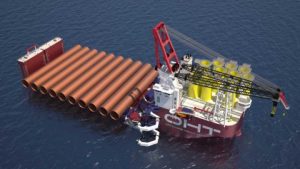 One of these is certainly the newbuilding order recently placed by the Norwegian Offshore Heavy Transport AS (OHT). The project is for the huge 48,000 dwt semi-submersible offshore wind farm foundation installation vessel. The construction will take place in China, but the team is now waiting for the patent for the unique Ulstein Alfa Lift vessel design developed by Ulstein Design & Solutions. According to the charts, the length of the vessel will be 216.3 m, and a breadth 56 m with a usable deck area exceeding 10,000 m2.  Specialists point that it will be able to accommodate up to 10 x 1,500 t ultra-large jacket foundations or 11 x 2,000 t XXL monopiles topped with transition pieces and mission equipment. In addition, the ship will carry a heavy duty Liebherr deck crane, so she could be used not only for wind farm installations, but also in heavy transportation, offshore construction, decommissioning, etc. 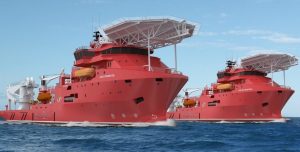 Another interesting newbuilding was recently announced by the Singapore -based Ultra Deep Solutions. They are developing the new hybrid design Diving Support and Construction Vessel (DSCV). This type of offshore ship is apparently company’s métier as they took delivery of two DSCVs during 2018 and are expecting 2 more during Q3 2018 and Q1 2019. All vessels are named after famous painters and are equipped with Twin or Single Bells. The new project is interesting as it will set new standards in fuel economy and environment protection. Thus, the vessel will be furnished with 3 MW batteries to cut back fuel consumption (the company’s goal is 4 – 5 tons or less per day working in a DP mode). The hybrid will be 125 meters long and 25 meters wide and is expected in approximately 30 months.

The past couple of years and the beggining of 2018 were quite neurotic for the shipbuilding industry. There were almost complete downfall in 2016, upsurge and record orders in 2017 and better figures in the Q1 2018; however elimination of 10% discounts that had been in place in many yards and attracted owners might affect the statistics slightly.

But despite the unstable market condition ship yards came up with vessels which are moving technology forward; and though it is too early to sum up the results of 2018 at present, it is already clear enough that the passing year will bring its own records and scientific breakthroughs that are going to change the shipping industry for the decades to come.