How to Cope with Bullying and Harassment at Sea 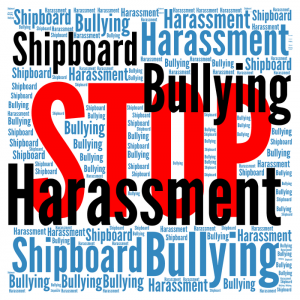 Modern business technologies offer dozens of conflict management strategies. Forbes experts even state that conflicts are vital for productive work. So they are, but on condition that all protagonists can forget the whole thing at 5 pm and go drink some beer with friends at their favorite pub. Meanwhile, confrontations that happen among people who work at sea are the completely different story indeed.

Obvious factors such as long hours of hard work, stress, living in unwelcome proximity with other people poison a working atmosphere. It entails exhausting squabbles over working matters or worse bullying, harassment and other forms of an inappropriate behavior.

According to Nautilus International statistics 50% of seafarers have experienced some form of bullying, harassment or discrimination at sea.

Below we will look closely at the problem of onboard conflicts and ways how seafarers can cope with unpleasant people they get stuck during a trip.

Natalie Shaw, director of employment affairs at the International Chamber of Shipping (ICS) reports that situation has changed for the better for the past 10 years, but violence has not disappeared from merchant fleet. There are several tendencies that ICS and ISWAN (International Seafarers’ Welfare and Assistance Network) outline in connection with on board aggression:

–  Cases of abuse, bullying, harassment, and discrimination are massively underreported. Victims prefer to suffer to the end of their trip and ask for the transfer to another vessel or request repatriation under false pretences.

– Most common reasons for bullying at sea are: nationality, race, sexual orientation, gender, age and religion.

– Officers bully junior members of their crew in the majority of reported cases.

– Even “mild” harassment such as jokes or teasing made persistently over several weeks or months can take a toll on mental state and cause depression or damage self-esteem.

Steps to Protect Yourself against Bullying and Harassment

On January the 8th 2019 new MLC 2006 amendment came into force adding Guidance on eliminating shipboard harassment and bullying to the first paragraph of Guideline B4.3.1 (Provisions on occupational accidents, injuries and diseases) of the Convention. This document was developed by ICS in collaboration with ITF in order to change the situation with onboard violence on the global level. It contains examples of inappropriate behavior, advices on actions in case of bullying and discrimination and provides samples of company policies and procedures for dealing with such cases.

Unfortunately, as so many of guidelines these are disconcertingly generic. So, let’s work out more specific plan.

Officers of such seafarers’ societies can either offer a psychological counseling and advice in the individual case or (with the seafarer’s permission) provide an active help. Thus, the complaint of the Indonesian rank about being bullied by Chief Officer and overwork entailed an ITF notification and a visit from Dutch Nautilus International trade union inspector to the vessel initiated by SeafarerHelp officers. The investigation revealed that three more Indonesian ranks were subjected to bullying as well. Moreover, crew wages were delayed systematically. As a result, wages were paid upon PSC query and Indonesians repatriated by their request.

Maritime industry has declared a war to aggressive behavior on board. Better working and living conditions, shorter trips also decrease a number of unpleasant incidents considerably. So, despite the fact that it will take years to free ships from the miasma of violence completely, the situation does change for the better.