Marine piracy has a long history. But only in recent years has it transformed into a well-organized criminal business posing a problem for the shipping industry and a serious threat for seafarers. Modern pirates are not interested in primitive “smash and grab” attacks. They hijack vessels to kidnap crew and steal valuable cargo. These guys are usually well-informed about their potential victim ship and adequately armed for the job. So, what are the legal means of protection against such a force?

Almost all mariners can name pirates’ hotspots even if waken in the middle of the night. The Gulf of Aden/Horn of Africa, Nigeria and the Gulf of Guinea, Southeast Asia and especially Strait of Singapore, Venezuela coast, etc. – all these areas are infested with pirates who despite having similar goals (kidnap the crew, demand a ransom) tend to operate different weapons and demonstrate distinctive behavior depending on the region.

The International Maritime Bureau Piracy Report shows that except those hunting off the Bangladesh coast (armed by knives only) Asian pirates are by far equipped the best. Even local fishing boat was attacked with the help of M16 riffles near Malaysia in September 2018. On the African East coast pirates also use automatic or semi-automatic weapons, sometimes even RPGs; but those are applied for the dramatic effect only. West coast of Africa is littered with guns; and here pirates might be as much interested in cargo and valuables stored on the vessel as in crew kidnapping. Piracy was spurred in South America by the recent economical crisis and political insurgency. As a result, marine pirates are not as ‘civilized’ there as, for instance, in the Gulf of Aden and are prone to crude robbery.

Regardless of the nationality, pirates usually choose the same tactic. They mostly pick bulk carriers and tankers as their victims and approach them on speedy skiffs firing at the bridge. Most attacks happen at dawn and dusk when the lights are low. 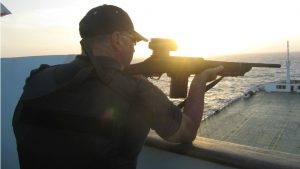 Reports also show that in all those cases when crews managed to deter the assaults successfully they had noticed pirates approach in advance and fired the alarm. Therefore, vigilant watches both on the deck and via radar and CCTV will increase chances of deterring pirates significantly.

Ideally, there might be an armed security onboard taking full care of the incident. As a rule, once they ‘convey’ by several shots that the vessel is going to offer resistance, the gang retreats to look for more vulnerable target. But armed security is expensive and still rather dubious acquisition.

Well, the crew have noticed an approaching danger, but pirates are usually armed and peopled onboard aren’t. There are several means of protection, though:

Another interesting technology was presented by American International Maritime Security Network. They have developed Liquid Deterrent System – foul smelling and stinging green liquid which should be showered on the approaching pirates. As a result, the attack will die out as the substance causes people to jump into the water to get rid of the smell and irresistible skin burning sensation.

Other non-lethal weapons include long range acoustic (LRAD) and laser devices, Active Denial System, compressed air launcher, rubber ball grenades, dazzle guns and electric shockers which even sound unconvincing when you know that the other side has Kalashnikovs. Therefore, if above mentioned means proved ineffective in preventing pirates from climbing onboard, no further resistance must be offered.

According to the popular resource Statista.com, which processes information from 22,500 data channels, recent years have shown quite an optimistic downturn in the number of pirate attacks against ships all around the world. Where there have been as many as 445 hijackings in 2010; various sources spotted only 180 pirate related incidents in 2017. However, the threat is still imminent; and maritime community has a long way to go before the problem of piracy can be eradicated for good.